Published for the first time today during the News Media Association’s weeklong Journalism Matters campaign, a survey of local editors reveals that local journalism has become even more important to the public during the coronavirus pandemic with increased audiences and engagement.

However, despite the growing value of local news to the public, local editors fear that the tech giants pose a profound threat to the sustainability of local journalism. Eighty-nine per cent of survey respondents agreed that the business practices of Google and Facebook pose an existential threat to local journalism.

And the same number of respondents – 89 per cent - said the UK Government should act to make the tech giants pay for the local journalism on their platforms, as the Australian authorities have done.

The NMA and its members have repeatedly called on the UK Government to intervene to protect journalism. Google and Facebook took around 80 per cent of the £14 billion spent on digital advertising in the UK in 2019, while national and local news titles, which produce the content which the platforms feed off without paying for any of it, took just four per cent, says the NMA.

NMA deputy chief executive Lynne Anderson said: “Local editors have issued a stark warning to Government; act now to curb the tech giants or place the future of local journalism - which has served the public so effectively during the pandemic – at risk.”

Local journalism has become even more important to the public during the coronavirus pandemic as people seek out trusted news and information. More than two thirds of local editors (68 per cent) reported an increase in audiences since the pandemic hit the UK in January this year and 55 per cent said readers were engaging more with their journalists or titles.

But the pandemic has had a damaging effect on press freedom and transparency. A majority of local editors (49 per cent) said they had encountered instances of public bodies using coronavirus as an excuse to withhold information which should be in the public domain.

And 46 per cent of local editors said the pandemic had had a negative effect on press freedom, with 47 per cent of survey respondents said getting information from local public bodies such as local council, police or health authority had become more difficult during the pandemic. 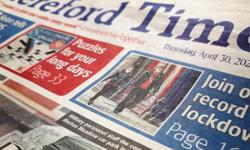