Do you invite reader comments, then not comment back?

If so, you’re probably not alone, but if you’re looking to create a sense of community with your readership, then you really should. That was one of my takeaways from our latest podcast, an interview with Loma-Ann Marks, editor-in-chief of interiors magazine Reclaim.

Instagram is a particularly important channel for the title and they encourage readers to post pictures (#my_reclaim) of their own beautiful rooms and furniture and then select the best for publishing in the next issue. Loma and her small team make a point of responding to each comment, either through a reply or a like, and this engagement makes the reader feel part of the Reclaim story.

Community is a two way thing.

Similarly, do you want to feature more black and Asian people in your magazine? If so, what are you doing about it?

Editors wanting to show a more ethnically diverse set of contributors and feature spreads, can’t sit back and wait for them to beat a path to their door; they have to reach out. Good intentions alone are not sufficient.

Loma made the point that while she had always liked showing the work and creativity of BAME designers, in the past, she might not have proactively sought them out.

Last year’s BLM demonstrations proved to be a wake-up call; since then, she has taken a much more proactive approach to creating a better balance of editorial subjects and contributors – she reached out to them.

The result was extremely positive and greatly expanded the horizons of the title. Reclaim has become a better magazine as a result.

At the British Society of Magazine Editors Awards in February, she was named ‘Editor of the Year’ in the ‘Homes & Interiors’ category. The BSME judges described Reclaim as a “brilliant and surprising magazine. The passion for the topic jumps off the pages and shines through.”

Her proactivity will undoubtedly have played an important part in winning the award.

This article featured in the 25 March edition of our weekly e-newsletter, InPubWeekly, which you can register to receive here. 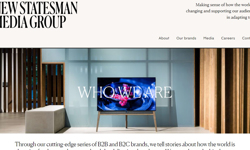